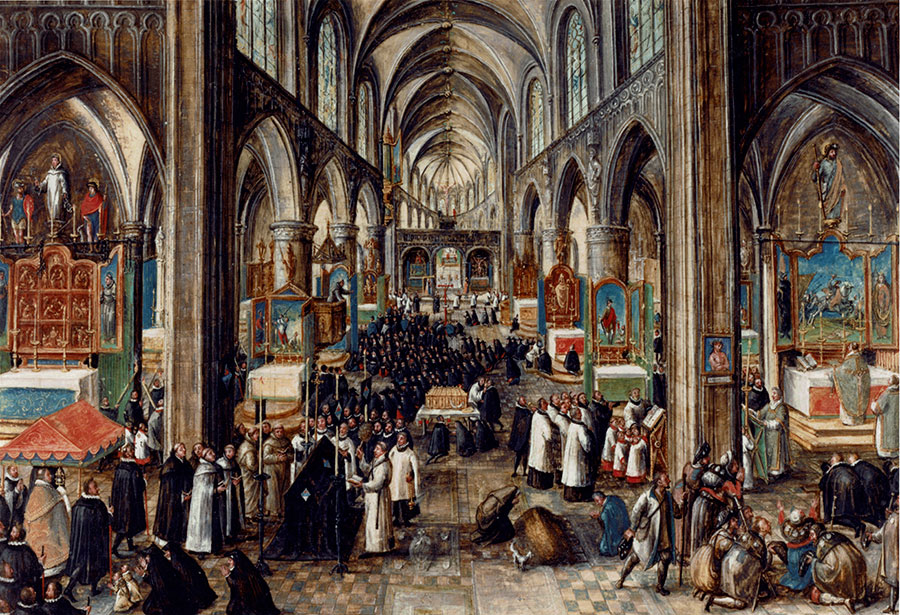 04 Dec The Way of the Church: Sacraments and Rituals

Martin (Leuven, 1534 or 1535 – Frankfurt am Main, 1612) was the younger brother of Lucas Van Valkenborch, noted for his depiction of the Tower of Babel, held by the Louvre. A member of the Guild of Antwerp since 1559, Martin lived in Antwerp for eight years, where he created this velina of exceptional complexity in a reduced form. Many of his works were falsely attributed to his brother or even to another painter, Paul Brill.

The subject matter is uncommon. Many representations of the interior of churches in both the Flemish and Dutch worlds have been noted. But these views often show empty buildings in which the artist aspires above all to showcase his mastery of perspective and the portrayal of architecture. Here, however, the painter is not content with only showing evidence of such abilities, but rather densely packs the church (certainly the Cathedral of Our Lady in Antwerp) with a crowd of people, arranged among themselves in various independent scenes. The painting could have been created for the elevation of the church to a cathedral in 1559, in any event before 1566 when the screen was destroyed by iconoclasts. To this day the Man of Sorrows can be viewed to the right of the first column, an anonymous painting from the beginning of the 15th century.

This painting calls to mind the altarpiece from 1445 by Rogier Van der Weyden in the Royal Museum of Antwerp, in which the seven sacraments are depicted. The similarities are clear, and it is highly probable that our painter had seen the work of the Master of Tournai.

In the side naves, the various altars come in succession with their white altar cloths. The detail work is meticulous, be it in the architecture or in the assemblies, and allows no less than the recognition of the very subjects of the altar pieces. In this way, when using a good magnifying glass, altars dedicated to Saint Leonard of Noblac, Saint Blaise of Sebastea, the Virgin, a patron saint, then Saint Nicholas of Myra, Saint Martin of Tours, and Saint James the Great can all be identified in succession from left to right in the side naves.

The most exceptional aspect in this meticulous painting is the various liturgical groupings. Let us look at them following the same path as that of the altars. To the left, a procession of the Blessed Sacrament, placed beneath a canopy with four bearers, and behind that the benediction of Saint Blaise (two candles are crossed on the neck of a pilgrim to cure him of a sore throat). From a raised pulpit suspended on a column, a man preaches before a vast and attentive crowd. We then participate in a procession of the statues of saints (at the two sides of the cross in red). Across the central part of the serliana of the jubé, the celebration of mass can be recognized. Descending along the nave to the right, we see a priest in confession, then a chorus accompanied by musicians, to the right the proclamation of the Gospel, and a mass for pilgrims with a priest on the altar. Returning to the central nave, we see absolution imparted upon a deceased person, then the veneration of relics in the center, assuredly referring to the “corne-reliquaire” of Saint Cornelia (found in the church of Saint John in Bruges).

This painting, a testament to the multiple activities carried out in the church, therefore links two sacraments (the eucharist and confession) and a certain number of rituals, points which traditionally designate a certain number of sacred rites, institutions of the Church in order to obtain spiritual effects. The ones we see here are: benediction, absolution, veneration of relics, songs, prayer, processions, etc. Thus, as in the altarpiece of Van der Weyden, we can see in this velina the mise-en-scène of some of these rites which are not separate from the sacraments. The sacraments are the ideal way to reach God, the rituals are the vestibule.

We could even draw conclusions on the connection between each scene and the dedication of the closest altar. Saint Leonard of Noblac is invoked in order to liberate the prisoners from their chains in the same way that the absolute liberates the deceased from the chains of eternal death.

A profoundly spiritual, rare, and exceptional work, both in its quality and its subject.