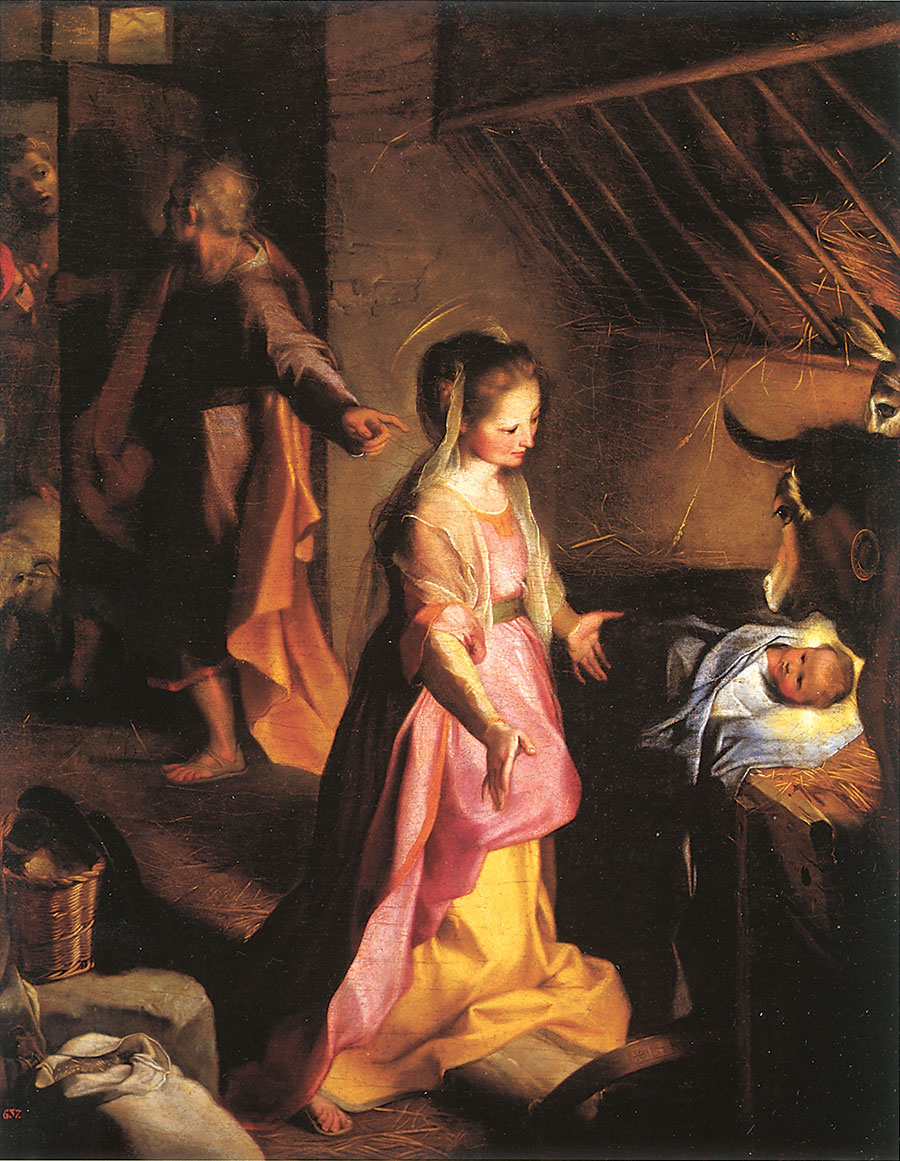 04 Dec Wonderment Before the Word of God Made Man, Federico Barocci

Posted at 18:59h in Travelling with art by adm_afca
0 Likes

Federico Barocci, born in Urbino in 1535 to a Lombard family, is among the key proponents of Mannerism, along with Correggio and Caravaggio, in the period of the Counter-Reformation. His was a fast and brilliant career, inspired by Raphael and admired by Michelangelo. About two thousands of Barocci’s drawings have survived, a number much higher all his contemporaries. His works are of an essentially religious character, intended to render perceptible the presence of God in the visible world. His popularity is bound with his compositional abilities and the emotive way with which he treats light, an element which could have influenced Rubens.

The Nativity, created at the request of Francesco Maria II della Rovere (1549-1631), duke of Urbino, is a prime example of this. The artist plays with the contrast within the dark stable, a true and typical stable with stone walls, lacking windows or other sources of natural light, with space for straw. Above there sits a hayrack and on the side, just brushed by the light, the heads of an ox and a donkey; to the lower left, a bag with some bread leaned up against a step upon which sits a basket, a small still life that creates a modest and simple context.

Supernatural rays emanate from Jesus: he is lying down beneath the ox and donkey keenly poised and ready to warm him with their respective breaths. The Child is not on the ground but in a manger: the light comes from him who will be defined as “the light of the world” (John 8:12). Mary is completely illuminated by him, as is Joseph’s back and the heads of the ox and donkey. The Child—as realism necessitates—is not crowned with a halo, a rather rare absence, substituted instead by the light he emits. He is turned to face his Mother in an interplay of glances which is the true center of the composition and the message of the painting. Mary’s gaze is brimming with affection for her little one. Her elegant silhouette, her refined clothes, the transparent veil on her head and back, the careful arrangement of her hair, and the delicateness of her gesture contrast with the poverty of the scene. The precarity of the conditions where the birth of Jesus occurs does not diminish the nobility emanating from the Mother-Son pairing. It could be said this is even then transferred to the ox and donkey, whose solemnity is not insignificant.

A notable change has suddenly developed in art, one which concerns the behavior of Mary toward the Child in this scene. Indeed, is she truly still kneeling before her Son as in medieval works? It is not entirely clear. What is certain, by contrast, is that her gesture is no longer one of adoration with clasped hands: she extends her arms, expressing welcome, admiration, amazed wonderment, and gratitude toward heaven. We can imagine that the Mother is silently reciting the Magnificat.

Joseph emerges just in the background with his cloak catching the light. He has his back turned and points insistently, an amazed witness of the Nativity, to the shepherds, still on the threshold of the stable, receiving them and indicating with a pointed hand the Child, bidding them to enter. It is as if Joseph, heir of the House of David, were making himself the guarantor of the protection and proximity of God to the people which culminates in the incarnation of Christ, as the liturgy proclaims: “He has saved his people among the prodigies, the King, reducing on dry earth the damp wave of the sea. But being born voluntarily of the Virgin, he opens for us a feasible path to the Heavens” (Liturgy of the Nativity).